Whiplash is a common and expensive problem in our society.

New research from Japan shows that while frontal collisions are the most fatal type of accident, rear end collisions are responsible for more soft tissue injuries.1 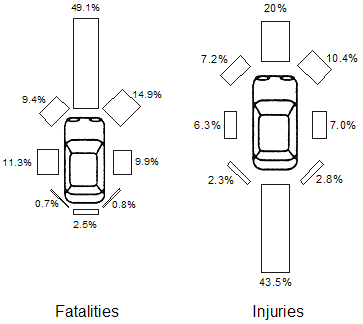 These illustrations show the distribution of injuries and fatalities, based upon the angle of collision. Most fatalities occur from frontal collisions, while nearly half of all cervical spine injuries are caused by rear end collisions.1

Estimates presented at the International Congress on Whiplash Associated Disorders (WAD) in 1999 claimed that in the US alone, whiplash injuries cost approximately $30 billion a year.

A significant percentage of this overall cost can be attributed to disability caused by such injuries, and the majority of these costs are focused on a very few individuals who are seriously disabled by their accident.

"Notwithstanding the good prognosis for recovery in most cases, WAD can account for a large proportion of the overall impairment and disability from traffic injuries. In a study of car occupants based on Swedish insurance material from 1976 to 1978, Nygren2 found the 101 WAD cases judged to have permanent medical impairment of 10% or more accounted for 29.8% of the total number of impaired car occupants. Furthermore, 21.8% of these cases developed a 50% or greater disability in wage earning, indicating that WAD can account for a large proportion of impairment and disability."3

Because of how common and costly these injuries are, it is important to understand who is at risk of developing long-term whiplash symptoms and how these chronic cases can be prevented.

That's exactly what this current study set out to do. The authors examined the insurance files of 2,523 insurance claims from 1989 and 3,223 claims from 1984. They then analyzed the data and compiled information on the age and gender of the occupants, the degree of disability, professional status (requiring high or low levels of education), and the type of injury of each occupant.

The authors found the following: