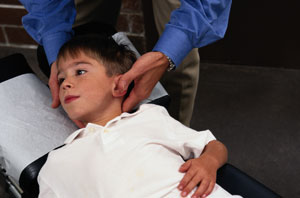 The survey included 956 chiropractors from 20 different European countries who had a total of nearly 20,000 pediatric visits a month. In the survey, 57% of pediatric patients were treated for musculoskeletal conditions, 23% for neurological issues, 12% for gastrointestinal complaints, and a smaller number were treated for infections or other miscellaneous concerns. Children represented 8.1% of chiropractors' patient base in Europe, lower than in the US average of 17%.

As more parents realize the benefits and safety of chiropractic for children, many chiropractors say they're beginning to see more kids in their offices according to a recent story from WAFB 9 News.

Marchand A. Chiropractic Care of Children from Birth to Adolescence and Classification of Reported Conditions: An Internet Cross-Sectional Survey of 956 European Chiropractors. Journal of Manipulative and Physiological Therapeutics 2012; 35 (5):372-380.